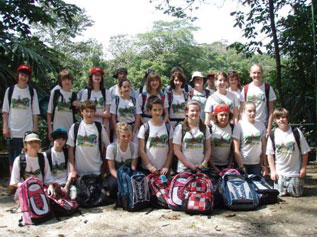 Since this past January the SCLC has completed a large number of important community activities that contribute to our overarching objective of linking communities with conservation through education and ecotourism. In just two months, the SCLC has made some remarkable achievements with our community development projects and tourism activities!

During this time the SCLC has completed:

• 6 Speaches from community members about their lives and work to 101 people;

•3 Introductions to the SCLC

The service projects were particularly successful and a lot was accomplished!

In May, the Avalon School group, from Edmonton, Alberta, Canada had some remarkable interactions with local schools, including Chilamate and Bajos de Chilamate.  The school also brought down many backpacks filled with school supplies and toothbrushes as well as a near $9000 donation for the Center that will be used to support two scholarship students and buy new computers for the Center and After-School program. We hope to develop relationships with the school and conduct Skype-based interactions between the two groups. This is an amazingly kind donation, which will be extremely helpful...and popular!

In June, a group of teachers participating in a visit with Global Explorers helped advance the sidewalk from the Chilamate School toward the center by 16 meters! It may not sound like much, but making cement by hand in the blazing sun is hard work.  Thanks to them for their help that will keep our students just a little safer.

Additionally in June we had a group of high school students visit us from Holton Arms Academy in Maryland with the World Leadership School. This notable group stayed in the community of El Roble for 8 days and completed some impressive work while having a great time.  The group totally revitalized the formerly dilapidated greenhouse, constructed a valuable two-compartment compost bin, and built a computer lab at the elementary school Kay Rica in El Roble (computers on their way!).

Another outstanding group of students, this time from Brooklyn, NY via Adventures Under the Sun, worked with a local landowner in El Roble and helped install a biodigestor! The biodigestor will collect manure, capture the methane, and then transport this gas directly to the house where the gas will be used for cooking. Talk about sustainability and conservation in action!

Finally, earlier in the year, the SCLC received a visit by the organization Ambassadors for Children. This group inspired and helped advance the development of two new classrooms at the Bajos de Chilamate School.  They also brought down an $800+ donation for the school that helped prepare the two new rooms that are almost ready for use. The Ambassadors are going to continue to raise funds back in the US until the classrooms are complete!

We have had a vast number of other people donate boxes, bags, and suitcases full of school supplies as well.  As we start a new semester we plan on getting these supplies to the schools and to needy students.

We have also received monetary donations from the Saltus Grammar School in Bermuda who generously donated $1000 USD toward the After-School Program and Ecology club of the SCLC.

Huge thanks are in order for all the hard work and support these many, many people provide to the SCLC. We kindly thank you!