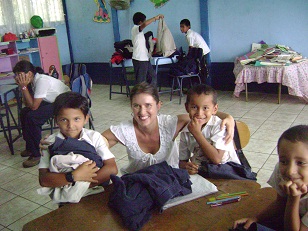 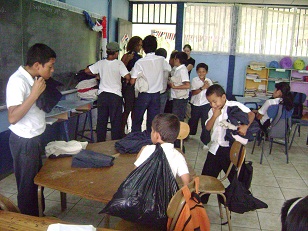 Last winter the Assumption, Avalon and Mary Butterworth schools donated over 15 duffle bags filled with shirts, pants, sweaters and many more shirts to the SCLC. Our Ecotourism department then had the challenging task of determining how to best distribute the much needed clothing into the community. This September I was lucky enough to accompany one of the SCLC’s neighbors, Meghan Casey of Chilamate Rainforest Eco-Retreat to the Linda Vista School where she had assisted with our coordinating efforts and clothing delivery.

For those of you how do not know, or who have lost touch, Linda Vista is a rural, two-room school with approximately 30 students ranging in age from 5 to 12. With the exception of the SCLC volunteers who come to teach either environmental education or the weekly English lessons, the Director, Cecilia Caicedo Navarro is their one and only teacher.  Somehow Cecilia calmly runs a relatively structured and orderly operation – the class maintains order in the same precocious way a dancing house of cards remains upright.

When Megan and I pulled up to the school we had over four biodegradable hefty bags full of clothes for the students and their extended families. The bags had already begun disintegrating in the heat, and the children yelled from the play field where they were in the midst of a largely barefoot soccer game. Under Cecilia’s direction we began emptying the bags, sorting everything by size, sex and color and putting the folded stacks on the wooden desks in the front of the classroom. As she called the students into the classroom, the excitement of the play field shifted to the excitement of the clothes, but the cheers remained at the same octave. I stepped closer to the wall and watched the exhilarated laughing, and shouting about how bags would be filled for themselves and their families.

I began to imagine imminent disaster and mass chaos. Children were everywhere. Soon our nice orderly piles of blue and tan shirts would be in complete disarray and I would be spending the next four hours repeatedly looking for an “adult small”.

Then she spoke. Cecilia told the students of Linda Vista to sit down and that they would all have equal turns in order of size. The kids went silent. Although they were jumping and jittering in their seats, they remained silent without leaving those miniature wooden desks.

Cecilia successfully distributed the clothing in about 20 minutes. Students came up, three by three in order of size (just as she had said) and were able to select several shirts for themselves and for any siblings. Imagine Christmas morning, but with 100 shirts – every one of them matching and each is your favorite!

Thank you Assumption, Avalon and Mary Butterworth schools!! None of this would have been possible without you!!!